I wanted to add a little eye candy to my craft show booth so I decided to make a bunting. I'm working on making my new tent and setup more inviting - I wanted something to spruce up the tent cover and to work with a blue and green theme. 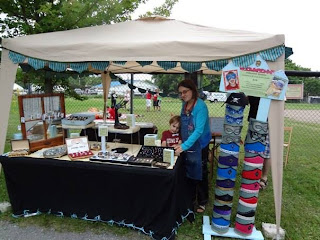 Most buntings are just triangles sewn to bias tape. I wanted something a little softer and not so hangy-down. I designed my own, based on henna designs for lotus petals.


Here is a link to the pattern I created: bunting pattern 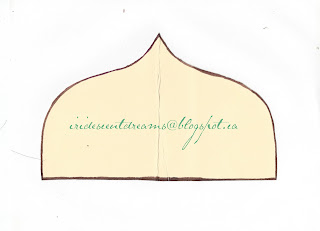 Or make your own - to make sure your shape is symmetrical, fold your pattern paper and draw your pattern and cut it out against the fold.

I chose a bold striped fabric and cut out my pieces so the stripes would be vertical.

To save time, you can fold your fabric over so you are cutting two layers at once. I use a small rotary cutter for most cutting - I don't like tracing then cutting with scissors, particularly with multiple layers. 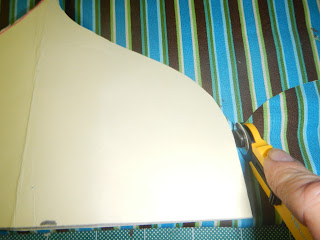 I found that after my first row of cuts, I could line up the pattern again staggered so I wasted very little fabric. 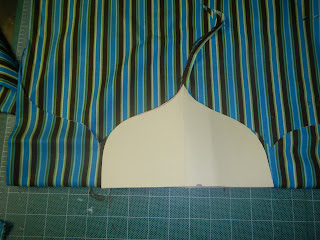 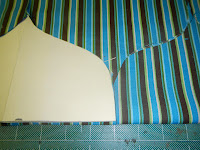 I just folded over the fabric so that the size was the same as the pattern, cut through 4 layers, then cut through the bottom. 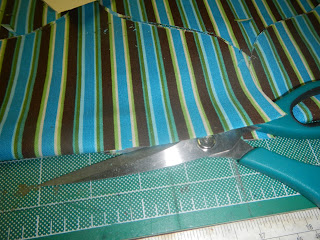 I wanted the edges to be pinked, so I tried two methods - first I sewed around the bottom edge and pinked, then attached the bias tape, but I found it easier to pink after all the sewing was done. My pictures here show them pinked first. I found that if I pinked first, sometimes the layers shifted in sewing and I had to do the pinking all over again.

Start by sewing around the bottom edges wrong sides together - this will keep the two layers together for the next steps. Don't forget to pin first! Follow the pink line in the picture below. Don't worry about the top edge yet.

Use extra wide double fold bias tape - this has more give to it when curved than ribbon, which is handy when hanging it in soft drapey curves. Sew it on in one go if you like, or do each side individually if you want the sewing very close to the edge. In my case, I will run a ribbon along the centre so any sewing will be covered up. I sewed a bit closer to the edge than the centre, but not so close to the edge that the sewing would show when I add the ribbon which is narrower than the bias tape.

Tuck in the top edges as you go - make sure you don't skooch out - happened to me on the first run. 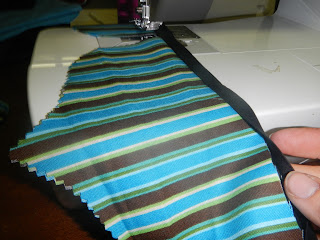 I left about 1 1/2" between each one - you could leave more or less depending on the look you want. Also, leave a few inches at each end of bias tape - you can use these to tie it onto something.

Add the ribbon along the front of the bias tape. 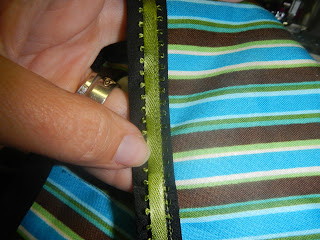 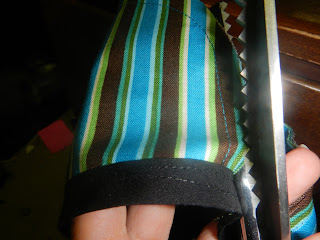 And there you go! I made four of these and they fit nicely around the tent - the bias tape is a little short of the 10' dimensions of my tent, so I added a bit more bias tape and bunting to one of them and it worked out great. In fact, I was able to tuck one of the little flags through these flaps at the corners of my tent and that held on just fine without needing to tie it on. 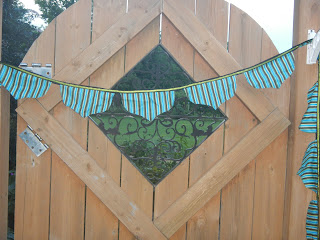 Follow up August 2013: I've been published at AllFreeSewing.com! Check out the link at http://www.allfreesewing.com/Holiday-Projects/Beautiful-Party-Bunting/ct/1 and see all the other great ideas they have there.
Labels: craft show Crafts sewing Tutorials 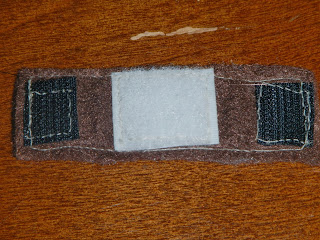 Making Christmas gifts for a favorite stuffy - tutorial and patterns 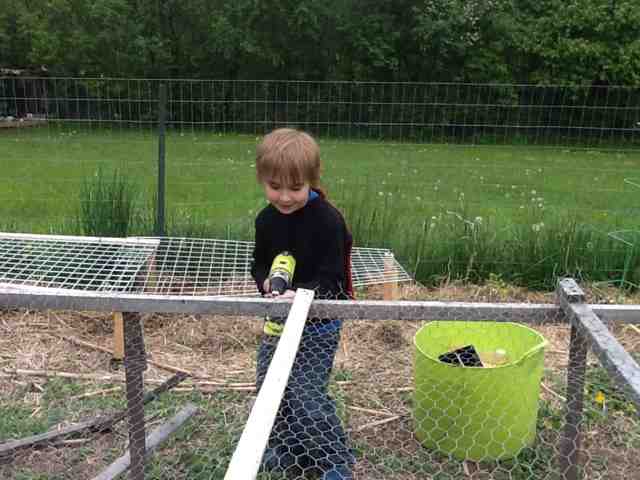